The Feast of Theophany 1925

It had only been a few months since the New Calendar was implemented in Greece in March 1924 when new problems appeared. Those who with holy tenacity remained faithful to the Patristic Traditions, having managed to celebrate the first Feast of Christ’s Nativity – although not without incident – now prepared to celebrate Holy Theophany. 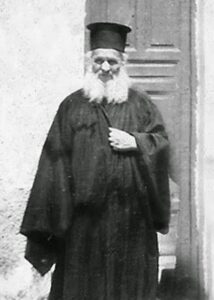 Having a bitter experience from the Nativity Vigil, at which they barely avoided bloodshed at the hands of the Military and Gendarme forces, this time they thought to layout a misleading plan so that the authorities who systematically followed their every step could not impede them. For this cause, the Council of the Orthodox Association gathered at the house of one of the faithful named Ioannis Sideris and decided the following: The Divine Liturgy and the Great Blessing of the Waters would take place at night in the private Church of Sts. Theodore in New Smyrna with the worthy struggler-priest Papa-Yiannis Floros (1860-1953) as liturgist, but the rite of casting the Holy Cross into the ocean would take place at the 17th century Church of St. George in Xerotagaron, Palaio Faliro (pictured below),

so that the authorities would be misled, and thus undisturbed they would be able to perform the rite of casting the Holy Cross into the ocean.

However, things did not happen as they planned. And this, because the resourceful Chrysostomos Papadopoulos once again concocted something underhanded. Always viewing the gatherings of the Genuine Orthodox Christians with malice, with the means at his disposal he convinced the Revolutionary Government of Stylianos Gonatas that this gathering of the G.O.C. at the Church of St. George in Xerotagaron to celebrate Theophany hid some intriguing conspiracy against the Hellenic Republic[1]. This trick of Papadopoulos was essentially ridiculous and ultimately it proved Papadopoulos himself to be ridiculous. It was natural that the Revolutionary Government take the appropriate measures so that Republic not be endangered!

The day of Theophany dawned. The Church of George in Xerotagaron, which would be the gathering place was decorated and quite ready to receive the faithful. Papa-Yiannis Floros would do the Great Holy Water and in continuation the rite of casting the Holy Cross into the ocean, at which the faithful would arrive from the Church of Sts. Theodore in New Smyrna.

At St George’s the chanters had properly begun the Service of Theophany, when a detachment of forty gendarmes and an infantry battalion arrived with the strictest orders to rescue the Republic from the danger of the G.O.C.! Without any respect, they entered the Church and went straight to the chanters’ stands. You see, they considered the chanters – a little elderly man named Tsantilis on the right choir, and Nikolakopoulos on the left choir – to be the most dangerous of the church-goers! If they should succeed with them, then certainly they would have at least half-accomplished their mission. The Chief-Lieutenant ordered them to immediately get off the chanters’ stands. The left-chanter, Nikolakopoulos, reacted and shouted with Christian courage:

“Mr. Lieutenant, in this place, the Crucified One gives the orders. Only outside this place can you give orders.”

These words had not even reached the Lieutenant’s ears when he violently pulled the chanter from the chanters’ stand, and in their stead, two others, D. Tzentzos[2] and Mr.  Gketouras undertook to continue chanting.

While the Service continued with disturbances, a certain woman named Maria Foskolou who was close to the chanters’ stand, indignant at the impious behavior of the Lieutenant who walked in the Church wearing his hat, not considering the holiness of the place, spontaneously lifted her hand, and with as much power as her advanced age allowed her knocked the Lieutenant’s hat off his head on to the floor and yelled at him:

“You are most impious! Don’t you understand that this is a holy place?”

They led them immediately to the nearest Police Station to be frisked, with the suspicion that they were armed, and that perhaps they were hiding incriminating documents.

And the result of their frisking was so ridiculous that it made the Commander angry, and slamming his hand on the desk he yelled at the officers:

“You fools, the Republic doesn’t fall because of Gospels, Crosses, and Prayer-ropes!”

The frisking had shown Papadopoulos’ “suspicions” to be so ridiculous and false. The only weapons they found on those blessed Christians were the weapons of being filled with the serenity of Christ, Gospels, and Prayer-ropes.

After confirming that the Republic was anything but in danger, they hastened to set free those faithful to the Patristic Traditions. Meanwhile, after the arrests, the Church of St. George was closed and sealed without the faithful ultimately being able to perform the rite of casting the Holy Cross into the ocean. However, they took Holy Water at the offices of the Association.

Thus, the day of that first Theophany ended full of agony for the Genuine Orthodox Christians.

[1] The head of the detachment at the Police Department uncovered this detail during the investigation.

[2] Mr. D. Tzentzos, a resident of Salamina, is the only one still alive (as of early 1977) who told us the above-mentioned.