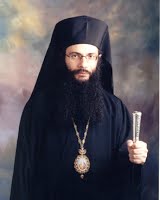 His Eminence Metropolitan Photios of Demetrias (of the GOC) whose secular name is Savvas Mantalis (born to George and Chrysse) was born on the island of Rhodes in the Dodecanese on June 3/16, 1968. Drawn to the sciences and to research in general, he obtained a patent for the invention of a designing system in 1984. As a high school student he formed a spiritually oriented research group along with other classmates where they would gather information regarding Orthodoxy and the “dark powers” – a topic that attracted many young students. Within this framework, this group organized a lecture (with the help of their parents and teachers) by N. Psaroudakes on “Zionism, Masonry, and Christianity” in Rhodes. From their research in this area of inquiry, they learn about Ecumenism’s corrosive character and thus, they wholeheartedly joined the church of the G.O.C.

In December of 1986, he discontinued his technical studies and in January of the following year, he was tonsured a monk in Kalymnos and took part in the founding of the Holy Monastery of the Transfiguration of the Savior in Mesovounion of Kalymnos (which was considered a dependency of the Holy Monastery of Esphigmenou on Mount Athos) where he assumed the role of the monastery’s Economos (Treasurer) and Secretary. Six months later one of his fellow classmates followed in his footsteps and became a monk in that same monastery. In 1994, he was ordained a deacon by his Elder who was the Metropolitan of the G.O.C. of the Dodecanese at the time, His Eminence Kallinikos, who also ordained him a priest the following year. As a parish priest, he served the parishes of Saint Niketas of Kalymnos and Saint Irene Chrysovalantou of Rhodes. At the time, he also undertook the catechism of both young children as well as those adults who sought baptism (primarily refugees from Northern Epirus). He became the director of the Metropolis’ magazine, and during the subsequent years, he was also mainly preoccupied with acquainting himself with the usage of computers and specialized in this area under the guidance of one our Church’s members who is a professor of Informatics at the University of the Aegean.

In July of 1998, he was forced to leave the Monastery where he was tonsured for reasons outside of his control (his Elder broke with the canonical Church of the G.O.C.) and found refuge at the Holy Monastery of Esphigmenou, of which he was a dependent monk from the beginning. He witnessed first hand the illness as well as the last moments of the ever-memorable Elder Euthymios along with the election of the new abbot of the Monastery, Elder Methodius. He stayed there for a year conducting liturgies as a monastery priest of this historic monastery and at times he would serve the Genuine Orthodox Christians of his hometown in Rhodes who remained faithful to the canonical Church the GOC and did not follow Kallinikos the former Metropolitan of the Dodecanese into schism. These faithful formed the parish of Saint Nektarios in Rhodes.

In June of 1999, he was invited by His Beatitude, the Archbishop of Athens and all of Greece, His Eminence Chrysostomos, to be the director of the Office of the Holy Synod and the director of the official journal of our Church “The Voice of Orthodoxy.” In August of the same year, the Holy Synod of the Church of the GOC elected and consecrated him as the Bishop of Marathon, a diocese which once shone forth in antiquity. At the same time, he undertook the Secretariat of the Holy Synod. Together with his duties, he also continued the study of the technology of computers as well as his studies in a) Greek History (specializing in”Hellenism and the West”), b) administration of Non-Profit Organizations (from the National Kapodistrian University of Athens via e-learning) and c) Studies in Hellenic Culture (from the Greek Open University) and graduated with honors. He received a Master’s Degree from the Open University of Cyprus’ postgraduate program in Education Sciences, specializing in Continuing Education.

He is Locum Tenens of the widowed dioceses of Phthiotis (from 2000) and of Cyclades and Dodecanese (from 2010). He has visited America and Australia several times as a legate of the Holy Synod for Church matters.

Furthermore he has the spiritual supervision of GOC of UK (with the permission of His Eminence Metropolitan Kallinikos of Achaia, now Archbishop of Athens). Since the beginning of 2009 he was appointed by the Holy Synod as a permanent member of the Holy Eparchial Synod of Church of the GOC in America. In October of 2010 he assumed the duties of the Chief Secretary of the Holy Synod.

Bishop Photios of Marathon was elected to be Metropolitan of Demetrias in 2015.