His Beatitude Archbishop Chrysostomos II of Athens and First-Hierarch of the Genuine Orthodox Church of Greece was born on 8 October 1920 in Erythrai (Kriekouki) of Megara, where he grew up as a young boy. Later he lived with his parents in the town of Lavrion in the province of Attica. While a student, he would frequent many churches and monasteries, growing fond of Byzantine music. Frequently, during the great holidays of the Orthodox calendar, he would travel from Lavrion to Erythrai in order to chant at his village’s church where the Genuine Orthodox would congregate to celebrate the divine services (typically without the presence of a priest, for they were small in number in comparison to the needs of the parishes). He completed his secondary education at the age of 17.

Fulfilling his father’s wish, he took the entrance examinations for the Evelpidōn Military Academy, planning to embark on a career in the military. However, he was afflicted by illness on account of which he abandoned the idea of a military career. He considered the illness a divine intervention that led to his enlistment in the army of the heavenly king and to the path of monasticism. That was the desire of his spiritual father, Bishop Matthew of Vresthena. Subsequently, he dedicated his time to recuperating and private study at his home during the period that coincided with the Greco-Italian War of 1940-1941 as well as the German occupation of Greece of 1941-1944.

Right after the liberation of Greece, he was tonsured at the Monastery of the Annunciation in Athikia, near Corinth, by the Archimandrite Kallistos Makris, later the Metropolitan of Corinth. During the Greek Civil War (1944-1949), the monastery was caught in the fighting between the opposing the sides and he was miraculously saved from death. He was ordained to the priesthood in 1947 by Bishop Germanos of the Cyclades of blessed memory, briefly living in the country on account of his illness while serving the faithful of Erythrai and Villia. He was tonsured into the Great Schema at the Monastery of the Virgin Kosmosōteira in 1948 by the ever-memorable Elder Theokletos Darademas. 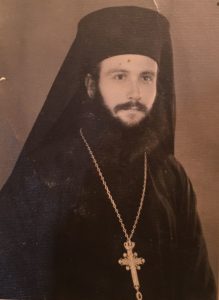 During the years 1951-1953, the New Calenderist Archbishop Spyridon Vlachos began a persecution of the Genuine Orthodox Christians. Our hierarchs were exiled. The churches were locked and our priests were captured and stripped of their cassocks, while being paraded and mocked by the police. On the eve of the Annunciation in 1951, the ever-memorable Bishop Germanos of the Cyclades reposed in the Lord. Spyridon Vlachos forbade his ecclesiastic burial and, showing himself to be a worthy successor of Caiaphas, he ordered that the body of the deceased be guarded by gendarmes at the Clinic of Saint Helen in the Athenian suburb of Sepolia (where he was transferred from jail while breathing his last) in order to prevent the reading of a burial service by a Genuine Orthodox priest. God, however, arranged otherwise. During the same period, the Archimandrite Chrysostomos Kiousis was secretly in hiding to avoid capture and stripping by the police, and celebrated the Divine Liturgy in country chapels and in the houses of faithful Christians that had been transformed into catacombs, moving about only at night with great caution. In March of 1951, in one of those catacombs, he celebrated the Vigil of the Annunciation of the Theotokos along with the ever-memorable Archmandrite Petros Astyfides (later, Bishop of Astoria), deeply grieved by the news of the passing of the ever-memorable Bishop Germanos. A white cloth with paper icons pinned to it separated the Holy Altar from the rest of the room. Two tables assumed the role of the Altar and the Table of Oblation. They celebrated the liturgy in this manner when suddenly at two o’clock in the morning there was a knocking on the door! Fortunately, it was not the police but rather members of N.E.O.S., the youth organization of the Genuine Orthodox Church, who were seeking a priest to secretly conduct a burial service, having convinced the gendarme guarding the body of Bishop Germanos to “look the other way.” While Fr. Petros continued the Vigil, Fr. Chrysostomos went to read the funeral of the reposed hierarch. As the funeral approached its end the gendarme, who was following the service piously, warned that the time had come for him to be relieved. As Fr. Chrysostomos and his entourage were heading for their car, the oncoming gendarmes spotted him. A chase ensued. However, Pericles, the priest’s experienced driver, drove through the maze of Athenian streets and managed to escape, thus keeping Fr. Chrysostomos from being captured and stripped.

In 1956, Fr. Chrysostomos assumed the responsibilities of the General Secretary of the Ecclesiastical Committee, which had assumed the leadership of our Church provisionally after the repose of the ever-memorable Metropolitan Chrysostomos of Florina, the First-Hierarch of the Church of the Genuine Orthodox Christian of Greece from 1943 to 1955. At the direction of the Ecclesiastical Committee, he traveled by train to Germany and France along with Fr. Akakios Pappas the Younger (the current Metropolitan of Attica and Diavlia) in order to establish contact with the Archbishop of the Russian Orthodox Church Outside of Russia (ROCOR) in Western Europe, St. John (Maximovich), with the goal of consecrating Bishops for the Genuine Orthodox Church of Greece. While agreeing to ordain clergy for the Genuine Orthodox of Greece, St. John referred them to Metropolitan Anastasy (Gribanovsky), the First-Hierarch of ROCOR from 1936 to 1965, regarding the question of episcopal ordinations. In 1957, Fr. Chrysostomos was chosen as a candidate for elevation to the episcopacy along with the priest-monks Akakios Pappas the Elder and Chrysostomos Naslimis by the Second Pan-Hellenic Clergy Conference of the Genuine Orthodox Church of Greece. He worked diligently for the consecration of the ever-memorable Archbishop Akakios Pappas the Elder and the restoration of the Greek episcopate by the ROCOR in 1960. After that, he founded the Monastery of the Most-Immaculate Virgin in Megara, serving the Church as secretary to the Synod.

On July 8, 1971 (o.s.) he was consecrated Metropolitan of Thessalonica, taking up additionally the pastorship of Eastern Macedonia and Thrace. As Metropolitan of Thessalonica he dedicated all his energies to the organization of his Diocese until January 16, 1986 (o.s.) when he was elected Archbishop of Athens and First-Hierarch of the Genuine Orthodox Church of Greece—the office which he held until 6 September 2010 (o.s.) when he reposed in the Lord after divine liturgy on the feast of the miracle of the Archangel Michael at Chonai.

On 8 June 1998 Archbishop Chrysostomos II was received by Constantinos Stephanopoulos, the President of the Hellenic Republic, becoming the first Archbishop of the Genuine Orthodox Christians to be received by a Greek Head of State.

May his memory be eternal!