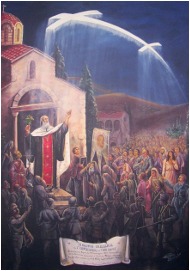 Appearance of the Cross in Athens in 1925.

The depiction to the left illustrates a miraculous event from last century that occurred during a time of affliction when God visited His people with a sign in the heavens. This was the miraculous appearance of the Holy Cross in the heavens over Mount Hymettus near Athens on the eve of the Exaltation of the Cross in 1925.

Because of this, many of the faithful in Greece refused to accept these unprecedented changes that were imposed on their Church, and they strove to continue to celebrate the feasts according to the traditional Church Calendar. Some of the innovating new calendar bishops sent police into the parish churches which had rejected this innovation and the priests were arrested, and the faithful were violently beaten and dispersed. There were even cases of the Holy Table being overturned and chapels being demolished by order of bishops of the State Church of Greece. On one occasion, a young woman, Catherine Routis, was struck on the head and killed. (For an account of her life, click here.) Such was the fanaticism of some of the innovating bishops. This was a time of confusion and affliction for many Christians who desired to worship God in spirit and in truth.

The feast of the Exaltation of the Cross came round in 1925 (on 14 September according to the Julian Calendar) and many gathered at the small church of Saint John the Theologian outside of Athens on Mount Hymettos. The following is an eyewitness account of a man who was present:

I was one of the men from the Police Institute who were sent to stop the vigil that night, some fifty years ago, at the country church of St. John the Theologian.  The Old Calendarists were keeping vigil there, because it was the eve of the feast of the Exaltation of the Precious Cross.  Since many people had gathered–more than two thousand individuals–we did not attempt to arrest the priest as we had been ordered, but we sat down quietly in the nearby court and waited for them to finish.

At about 11:30 at night, we heard a loud and strange uproar coming from the shouts of the multitude. Without delay, we ran to see what was happening –and we saw. The whole multitude of the faithful was in a state of excitement. Some were weeping and others, crying out “Lord, have mercy,” were kneeling and had turned their eyes toward heaven, and yet others were fainting, overwhelmed with great emotion. Then we too looked and beheld the marvel: an enormous radiant Cross, very high above the church, was illumining the whole area. At first, we were seized with fear, but immediately we came to ourselves, and forgetting the purpose for which we had been sent, we fell to our knees and wept like little children.

Of course, it is superfluous for me to tell you that, filled with emotion, we attended the rest of the vigil to the end–no longer as persecutors, but as faithful Christians. In the morning when we returned to the Institute, we told everyone about the great marvel which we had been deemed worthy to see. Afterwards there was an investigation and all of us swore under oath that we had seen the Precious Cross clearly, high in the sky.

For traditionalist Orthodox Christians, this obvious sign from God is “A Divine Confirmation” of His blessing and encouragement for us to struggle to preserve the Holy Traditions of the Church, of which the Church liturgical calendar is an integral and inseparable part. By our refusal to abandon the Liturgical Julian Calendar, we make manifest our belief in “One Lord, One Faith and One Baptism.” (Eph 4:5)

During His earthly sojourn, our Savior once called the multitude unto Himself and said:

Whosoever will come after Me, let him deny himself, and take up his cross, and follow Me. For whosoever will save his life shall lose it; but whosoever shall lose his life for My sake and the gospel’s, the same shall save it. For what shall it profit a man, if he shall gain the whole world, and lose his own soul? Or what shall a man give in exchange for his soul? Whosoever therefore shall be ashamed of Me and of My words in this adulterous and sinful generation; of him also shall the Son of man be ashamed, when He cometh in the glory of His Father with the holy Angels. (Mark 8:34-38)

By this stupendous miracle of the appearance of the Cross in 1925 on the feast of the Exaltation of the Cross, our Savior has once again called those who wish to follow Him on the narrow way to take up their Cross and follow Him through our unflinching efforts to adhere to the Holy Tradition of the Orthodox Church.

We live in an era wherein there is indifference to truth on the part of many. The calendar change was just one step in the process to undermine the teachings of the Church that we have from Apostolic times. The government-supported state churches in the Orthodox Christian homelands have been infiltrated with false shepherds who are ashamed to confess the Tradition given by Christ to His Apostles and have abandoned the Cross and betrayed the Faith. They have followed the broad way by uniting themselves with the Pan-heresy of Ecumenism through their membership in the World Council of Churches and their recognition of the priesthood and baptism of heretical congregations who teach condemned heresies.

The Apostolic Constitutions instruct all Orthodox Christians how one is to respond to bishops who proclaim heretical false teachings:

I shall judge the bishop and the layperson. The sheep are rational and not irrational, so that no layman may ever say that, “I am a sheep, and not a shepherd, and I give no account of myself, but the shepherd shall see to it, and he alone shall pay the penalty for me.” For even as the sheep that follows not the good shepherd shall fall to the wolves unto its own destruction, so too it is evident that the sheep that follows the evil shepherd shall acquire death; for he shall utterly devour it. Therefore, it is required that we flee from destructive shepherds. (Apostolic Constitutions, PG 1,633)

Our Savior Himself warned us with His words, “And then shall appear the sign of the Son of man in heaven: and then shall all the tribes of the earth mourn, and they shall see the Son of man coming in the clouds of heaven with power and great glory.” (Matthew 24:30) How we choose to respond to the present day betrayal of Orthodoxy will determine if we will rejoice at the Second Coming of Christ or if we will mourn at His Second Coming. At that time the Mystery of the Cross will divide all of mankind.

[i] The Gregorian Calendar was invented by the astronomers of the heterodox Pope of Rome, Gregory, in the 16th century and it became the liturgical calendar of the papists from that time. This arbitrary change of the calendar in the west was condemned in the Orthodox east for many reasons, but one reason was that no single bishop or local Church had the right to change the calendar without an Ecumenical Council. Just as the Julian Calendar was fixed by an Ecumenical Council, so also, any changes would have to be made by a legitimate Ecumenical Council. In the 16th century the calendar change was seen as an attempt to establish the principle of the primacy of the Pope over all bishops and councils of bishops.

Subsequent events demonstrate that the change of the calendar in 1924 was a first step towards uniting with the heterodox churches of the west, guided not by Christian love of the truth, but rather, guided by politics and indifference to Apostolic Tradition.